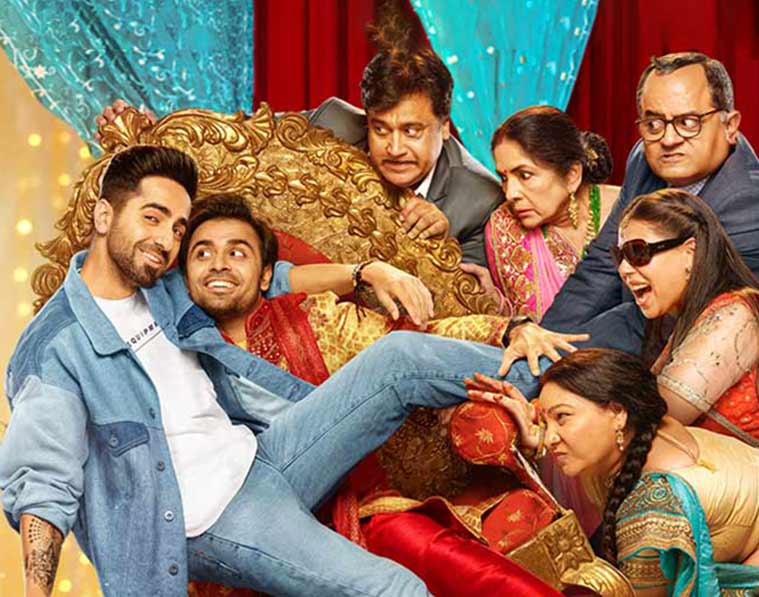 The most commonly used phrase in Indian households is ‘log kya kahenge?’ This fear of public shame had led to many centuries of repression in the country. It is also the reason same-sex relationships are regarded with distaste as anything that changes traditional thought and behavior is seen as ‘unsanskaari’. Indian cinema, however, is moving at a snail’s pace in changing public opinion about same-sex relationships. After Ek Ladki Ko Dekha Toh Aisa Laga (2019), Shubh Mangal Zyada Saavdhan is the second mainstream film to explore this subject. While not technically a sequel to Shubh Mangal Saavdhan (2017), this Hitesh Kewalya directorial stars Ayushmann Khurrana in the lead role. He is reunited with his Badhaai Ho co-stars Neena Gupta and Gajraj Rao while Jitendra Kumar, known for web series like Bachelors and Kota Factory stars as the co-lead.

Kartik (Ayushmann Khurrana) and Aman (Jitendra Kumar) are in a relationship. While Kartik has no parents to answer to, Aman belongs to the large Tripathi family who is unaware of his sexual orientation. When he visits Allahabad for his cousin’s wedding, Kartik goes with him and the men are caught kissing by Aman’s father Shankar (Gajraj Rao). At first, Shankar believes that Aman is simply going through a phase and that he will “get better”. But when Aman publically kisses Kartik at the wedding, all hell lets loose. From threatening suicide to pressuring him into marriage with a girl, Shankar and his wife Sunaina (Neena Gupta) do everything to make Aman change his mind. But Kartik has taken to the Tripathi parivaar and he will stop at nothing to make them accept him.

The only thing abnormal about homosexuality is that it hasn’t been represented well in mainstream Bollywood. Even Ek Ladki Ko Dekha Toh Aisa Laga catered to the more ‘woke’ audience. Shubh Mangal Zyada Saavdhan aims to normalize same-sex relationships for the masses. Hence, it utilizes comedy, dysfunctional family relationships, comedy, naach-gaana, and more comedy to appeal to the larger Indian audience. The dialogues are cheesy but evoke much laughter and the cast that delivers them are brilliant in portraying the dysfunctional family set-up. The blame games and self-victimization remind you of your own family gatherings. But at the end of the day, the film tries to deliver a simple message of love and acceptance.

Leading the circus of insane characters in Shubh Mangal Zyada Saavdhan is Ayushmann Khurrana who does what he does best. There are various plugs used to remind us of the actor’s previous films be it Dream Girl, Badhaai Ho or even Shubh Mangal Saavdhan, just to let you know how this actor is unlike the mainstream stars of Bollywood. His roles only seem to be getting quirkier and frankly, we do not mind. While Ayushmann’s Kartik is filmy and over-dramatic, Jitendra’s Aman is more serious and poised. They make a good pair and their chemistry is as sweet as it can be. But the actor that steals the show is Neena Gupta with her class ‘Indian mother’ act. The family matriarch has been given ample opportunity to perform to her best and boy, does she do a great job. She is both stern and charming and her Badhaai Ho husband Gajraj Rao complements her well. Sunita Rajwar, Manu Rishi Chadha, and Maanvi Gagroo also add to the craziness of the family in supporting roles.

What Could’ve Been Better:

The movie does not explore the perils of homophobia or the oppression faced by the LGBT community. Catering to Indian baby boomers, it tries to keep the mood light with plenty of comedy and masala entertainment.

Why You Should Watch:

Shubh Mangal Zyada Saavdhan is essentially a love story packed with lots of comedy. Not only does it make for an entertaining watch but its normalization of homosexuality is done in the most Bollywood way there can be. Watch it for two hours of non-stop laughter and entertainment.