Kim Kardashian is living it up as a newly single woman after split with Pete Davidson.

Kim Kardashian Goes on a Trip to Idaho

Days after her split from her boyfriend of nine months, Pete Davidson, the SKKN founder went on a fun getaway with friends and family to Idaho. As a source exclusively tells, the mom of four—who shares her children with her ex Kanye West—seemed “happy and relaxed” during their time away. During the trip, Kardashian participated in various adventurous activities.

“They all hung out on the lake and did lots of watersports and boat rides,” the insider shared. “The club had a big water apparatus set up on the lake with slides and trampolines that the kids got to enjoy. They also tried stand up paddleboards and kayaking. Kim sat in the boat and watched the kids having fun.”

One of the kids included in the group was none other than Kim’s oldest daughter North West, 9, who was seen enjoying the outdoor festivities alongside her mom, in a video shared to their TikTok channel. And as the source explained, Kim captured every moment of their experience, sharing that the Kardashians star took “lots of pictures.”

Added the insider, “She enjoyed being with friends. She was very chatty and smiling and was also focused on her kids.”

Kim also kept her fans in the loop of her girls’ trip, sharing all the photographic proof of her daring side to her Instagram Stories. In a series of clips shared Aug. 15, Kim showcased her wakeboarding skills, jokingly captioning one video, “It’s the screaming for me.” 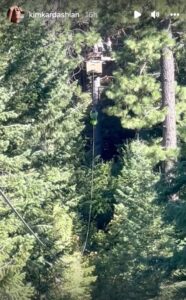 But that’s not all: Kim also posted a photo of wooden long bridge she used to walk across before ziplining, writing, “I cried every step of the way because I am so afraid of heights, but I did it. And I promise I’m never doing it again.”

She can revisit her experience of ziplining whenever she wants, thanks to footage captured during the event, which Kim admitted to. “My eyes were closed the entire time,” she wrote alongside an aerial shot of the zipping line. “So, I’m glad I have these videos to see how pretty the scenery was.”

Masstaani Guitar Chords With Strumming Pattern Lyrics By B Praak