Selena Gomez has opened up about the “unfair” treatment she’s received in the public eye and the impact of being sexualized at such a young age.

The Only Murders in the Building star recently sat down with fellow comedians Amy Schumer, Tracee Ellis Ross, Quinta Brunson, Molly Shannon, and Bridget Everett for the Hollywood Reporter’s comedy actress roundtable to discuss the challenges they’ve faced as women in the entertainment industry.

Schumer, who stars in the Hulu television series Life & Beth, took the opportunity to commend the 29-year-old actress and singer for paving her way through the industry, despite being “sexualized at such a young age”.

Calling the situation “really unfair,” Gomez went on to mention a particular moment in her singing career that made her feel “ashamed”. “I did an album cover and I was really ashamed after I did it,” she told the roundtable. “I had to work through those feelings because I realized it was attached to something deeper that was going on. And it was a choice that I wasn’t necessarily happy that I made, but I think that I’ve done my best, at least I try to be myself.”

The Rare Beauty founder explained that the album cover felt unnatural for her because she’s not “an overly sexual person.”

“Sometimes I like to feel sexy, but that doesn’t mean it’s for somebody else. It can be for me,” she said.

While she did not mention the album cover in question by name, Gomez had appeared nude on the cover of her 2015 album Revival, when she was 24 years old at the time.

At the time, she shared the album announcement on Instagram. More recently, as Gomez told the roundtable, she stays away from social media. The actor — who hasn’t been on the internet for more than four years — explained how social media gives her unrealistic standards of what she should look like.

“Well, I have to be honest, I don’t go on [social media] anymore,” Gomez said. “But you’re seeing all of these other people [post these images] and I can’t look that way. It’s impossible. I don’t find it attainable and the moment I’m not on it, everything else becomes real.” 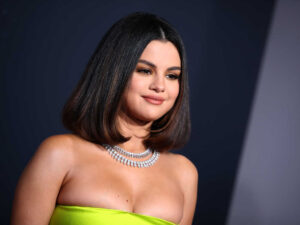 Gomez began her career nearly 20 years ago as a child actor on the children’s series Barney & Friends, before landing a role on the Disney Channel’s Wizards of Waverly Place. Since then, she’s risen to superstardom as an actor and musician — all the while trying to break the Disney mold.

Selena Gomez and her view

“I think I’ve done a pretty good job of removing myself from that because I’m pretty honest about my imperfections,” Gomez said. “But I took control of the narrative of my life once I started becoming older because, growing up, I didn’t have a choice.”

“Now I understand that there are certain boundaries that I need to set for myself, and I respect and adore so many people, but I’ve got to do what’s best for me,” she said.