Amazon is doing with its new series The Rings of Power. It's a massive undertaking with seemingly impossible stakes in a time when fantasy television is at its most popular.

Have you ever had a billion dollars laying around, a lifetime love of The Lord of the Rings, and a desire to make a TV series in that world? Because that’s what Amazon is doing with its new series The Rings of Power. It’s a massive undertaking with seemingly impossible stakes in a time when fantasy television is at its most popular.

And while Amazon has spared no expense advertising this series so far, there are a ton of questions to be answered about what this show is and whether it’s something you want to sit down and watch when it hits Prime Video on Sept. 2. Here’s what you need to know.

Is The Rings of Power a prequel?

In many ways, yes. The Rings of Power takes place before the events of The Lord of the Rings, so for the sake of simplicity this series is a prequel to the films.

The Rings of Power takes place thousands of years before The Lord of the Rings. It’s a period in Middle-earth referred to as the Second Age because time in this world is divided across globally impactful events. The Third Age, where Sauron is a big glowy eye and is hunting for his ring, is very far away from the events of this series. Sauron is very much person-shaped in this series. 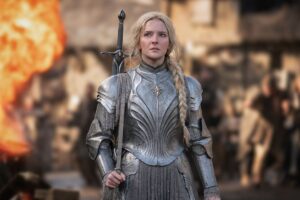 Additionally, where the films were adapted from the three books written by J.R.R. Tolkien, the TV series is not so thoroughly sourced. Amazon was unable to secure the film rights to The Silmarillion, Tolkien’s collection of stories from before The Lord of the Rings. Instead, this series will be based on the appendices in The Lord of the Rings. Tolkien left a ton of notes about the history of Middle-earth in his very popular trilogy, including an abridged history of many of the events within The Silmarillion.

If you’re confused about what exactly this means for this series, you’re not alone. Even in The Silmarillion, there aren’t the same kind of rich details regarding the events of the Second Age you get in The Lord of the Rings. That means Amazon’s writing team has a lot of space to fill with things Tolkien didn’t explicitly outline. It’s made some Tolkien fans nervous about the show being respectful of the source material.

Do I need to watch or read anything before starting it?

You don’t need to have seen The Lord of the Rings or The Hobbit enjoy The Rings of Power. Similarly, if you have seen those films, but it’s been a while, you’re fine. It’s not necessary to have recently consumed the extended editions of every film, and the same goes for all of the books. It’s certainly not going to hurt if you’ve seen them recently, or if you’ve read The Silmarillion at some point. And don’t fret if you’re ever lost about something in an episode. We’ll be posting recaps and explainers as early as possible, and we’ve got a terminology guide for the show too.

What is it about?

If you’ve watched or read The Lord of the Rings, you know it focuses on Sauron’s Control Ring. This golden ring was created as a way to manipulate the leaders of the races of Dwarves, Elves, and Men who received powerful magic rings as gifts. Sauron’s ring often called The One Ring, corrupted an effort to bring the people of Middle-earth together after a great war against Sauron’s old boss, Morgoth.

The Rings of Power, as the name suggests, is the story leading up to the creation of Sauron’s ring. It’s the history and politics of Middle-earth after a brutal war and the efforts to grow and thrive after. We’re going to see Dwarven kingdoms at their most glorious instead of the ruins we see in Lord of the Rings. We’ll follow a younger, impulsive and battle-hardened Galadriel long before she becomes the powerful, ethereal being we meet in the movies. We’re going to see how the great Kings of Men went from being a great and powerful empire to the shattered, scattered remains haunted by the Ringwraiths they created through their greed and malice. 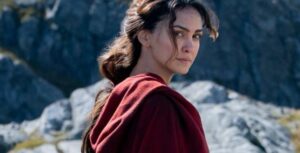 Instead of a single quest, like The Lord of the Rings, you can expect to see many beautiful and twisting paths leading the audience to what will ultimately be a fairly dark conclusion.

How many episodes are there?

This first season is going to be eight episodes, but Amazon has already announced it will be making at least five seasons. Unless the first season or two are catastrophically bad in terms of viewership, you can expect this show to be a topic of conversation for the foreseeable future.