Greetings are a great way to start your day. Especially with WhatsApp images and GIFs. In Janmashtami, Lord Krishna is worshipped by millions of devotees. For his love for butter, he is fondly called Makkhan Chor. His appearance day in the Kali-yuga is celebrated as Krishna Janmashtami, one of the most enjoyed festivals. This year, the festival falls on Thursday, August 18.

This festival is celebrated all over India by the Hindu majority. The people called this festival by different names like Krishna Janmashtami, Sree Jayanti, Gokilashtami, and Srikrishna Jayanti. The birth of Lord Krishna took place to dispel evil from the earth and spread the message of love and brotherhood. Lord Krishna was the eights child of the Devaki and Vasudeva and he proved the prophecy to kill Kind Kansa. However, King Kansa tried many times to kill Bal Krishna when he was very small but every time his efforts were in vain.

The Krishna Janmashtami is a very important festival for all the Hindus and they also keep fast on the same day. The devotees break their fast on the next day after midnight. Also, they worship Lord Krishna by singing songs and aarti or Lord Vishnu and Krishna. Some shlokas of the Lord are also sung by the devotees. The idol of Krishna is decorated with new sparkling clothes, mukut, and other jewellery.

Also, to celebrate this day many Hindu temples are decorated with lights and flowers. A host of bhajans and kirtans takes place in the temples. Many spiritual places perform the dance, and drama of Krishna life. Even the schools celebrate this auspicious festival by dressing the small children in Lord Krishna dress and dance performances take place.

Another major thing that took place during this festival is Dahi Handi that takes place on the day of Krishna Janmashtami. In the childhood, Lord Krishna was named as Makhan Chor and that’s why this event takes place on every Krishna Janmashtami in which Dahi Handi is hung on the rope at a certain height and a person has to put a hole in that Handi by creating a group of people and climbing over them.

Places like Iskon temple in Delhi and Vrindavan, Prem Mandir in Vrindavan, Shri Nathji Temple in Rajasthan, Jaganath Temple in Odhisa and Govind Dev Ji Temple in Jaipur are decorated well where a large crowd gathers on the occasion of Krishna Janmashtami. Also, some decorated Jhakis take place in major areas to put some unique aspects of the festival. The festival is more special in Mathura, Vrindavan, Gokul, and Dwarika where whole Krishna life revolves. The Rasa Lila shows take place in many temples for which a large number of devotees visit the temples.

Here’s how Shri Krishna was born…
Shri Vishnu asked Goddess Yogmaya (a manifestation of Mother Goddess) to take birth in Yashoda’s womb. Interestingly, at the same time in Mathura, Devaki conceived baby Krishna. But Devaki had challenges aplenty because she and her husband Vasudev were held captive a in a dark prison by Kansa.
But why did Kansa hold Devaki and Vasudev hostage?
A divine prophecy warned Kansa that Devaki’s eighth son would be the cause of his death. And since Kansa feared for his life, he killed all of Devaki’s seven children.
But how did Krishna survive?
Vasudev (mentally in an unconscious state) carried baby Krishna soon after birth to Gokul even as the rains lashed Mathura and the adjoining Braj region on the eventful night. The doting father put the baby in a basket, carried it on top of his head and crossed the river Yamuna to visit his friend Nanda’s house. Meanwhile, Shesh Nag, Shri Vishnu’s loyal servant, appeared to protect the baby from the rains by spreading its five-headed hood.
After reaching Nanda’s house, Vasudev exchanged the babies. Subsequently, when Kansa learnt about the birth of Devaki’s eighth child, he took the baby away. Oblivious that the baby girl was not Devaki and Vasudev’s eighth child, Kansa went on to kill her. And as he raised his weapon in the air to kill the baby, she appeared in the sky to reveal her real form.
However, Kansa made several attempts to trace baby Krishna’s whereabouts, but in the end, he was punished for all his wrongdoings.

This Janmashtami, send your loved ones gifs and images of Janmashtami to send your blessings.
Here are some sweet wishes and gifs that you can share with your family and friends on this auspicious occasion: 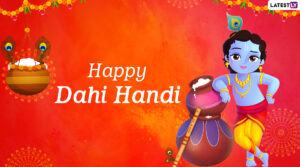 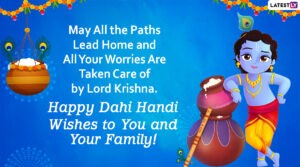